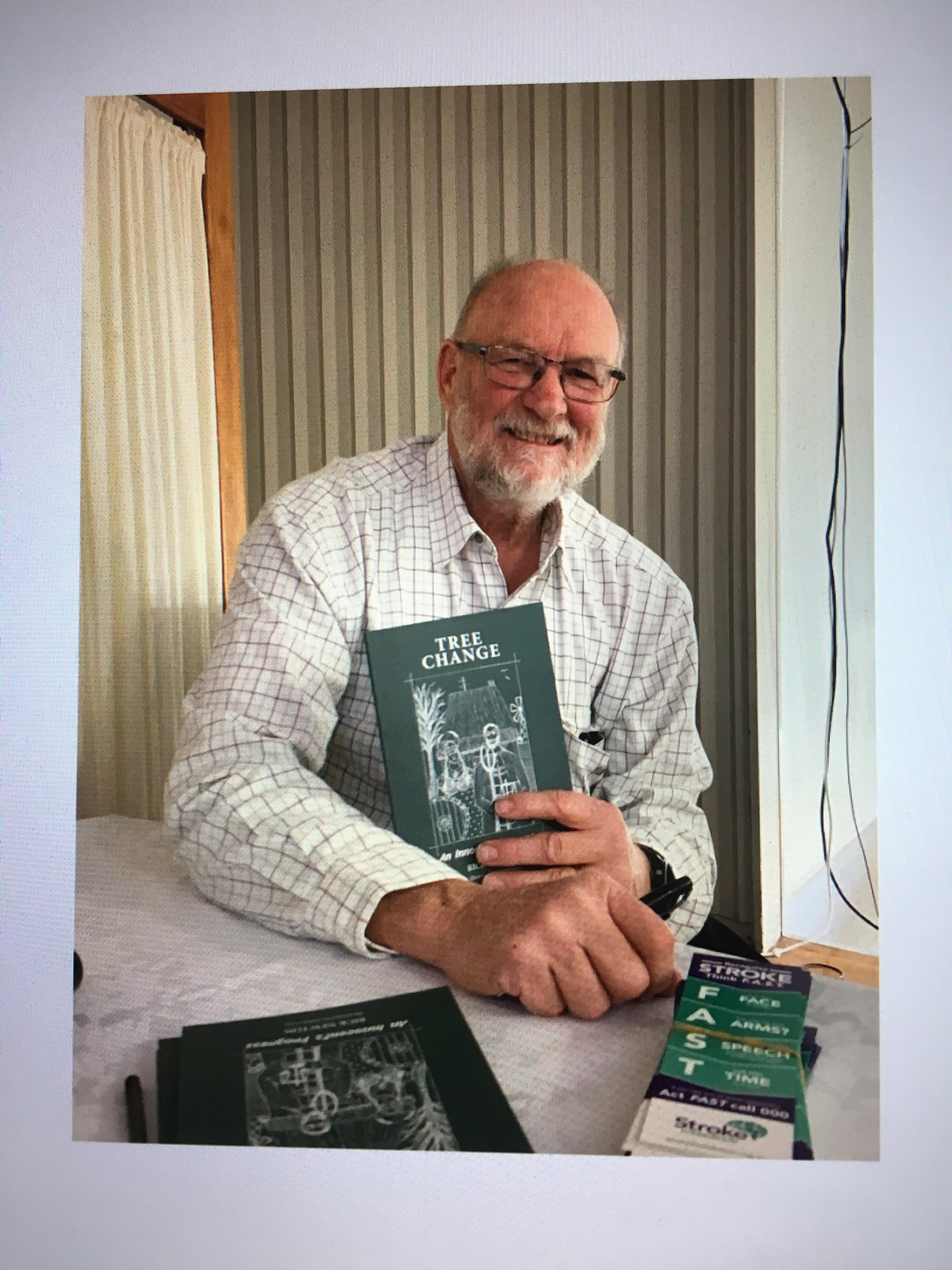 Tree Change. An Innocent’s Progress may just be the book for you if you are thinking of moving.

Dr Rick Newton and his wife, Barbara, were early tree changers.  They moved from the hustle and bustle of Sydney to Tullamore in the central west of New South Wales. It takes nearly six hours to drive from Sydney to the rural hamlet.

Tullamore has a population of around 280.  Being a rural area, however, Rick had more than 1,000 patients on his books.

Did you know that Tullamore is mentioned on the first verse of singer Geoff Mack’s song, ‘I’ve Been Everywhere’?  (I didn’t).

After 20 years Rick and Barbara are still living in Tullamore – and enjoying the rural life.

And. Rick is now the author of Tree Change – An Innocent’s progress.

The book is a great read. It’s an account of a treechange by solicitor Colin Blake and his wife, Di to the town of ‘Threadbare’.

Throughout the book are stories of the joys and challenges of having a treechange. We learn of the renaming of Colin and Di’s home to ‘Litigation’, we’re introduced to cows called Rosemary and Thyme, and a bull named Cuddles!

There are also lessons at the end of each chapter of ‘Treechange – An Innocent’s Progress’.  In fact, there are 23 lessons – handy if you are thinking of buying a few (or more) acres.

Rick says: ‘I am still working as a telemedicine consultant with the Remote Medical Consultation Service in the central west of New South Wales. I work one in three 24 hour shifts.  I also feed my cattle in a drought in my spare time’.

What attracted the Newtons to Tullamore?
‘My wife and I did not know Tullamore before driving into it but were impressed with a little hospital and town that had been struggling for the past 18 months without a doctor. We thought we could make a difference (cliché, I know) and give it a couple of years and move on. The book will give you a clue as to why we are here after 20 years’.

Why did Rick write the book?
‘Encouraged to write the book by friends I had relayed my near-disasters to at parties. They all got a laugh. I was encouraged to publish it initially as a gift for my children and grandchildren but on reflection saw it as a way to recognise a couple of close friends that you will read of in the book. It was to become a fund-raiser for Stroke and Brain Cancer research by selling at two local ‘book launches’.

So far more than $4000 has been raised which is great for this little community. I’ve sold >250 books at $20 each for those at the fund-raisers and usually more from those I’ve sent the book to with links to make their donation to the Stroke and Cure Brain Cancer Foundations’.

What do you think is special about Tullamore?
Small town. All look out for each other. Never taken for granted with my time as GP which was unlike city (or from what I’ve heard of large rural town) practice.

Are there any challenges of living there?
No meals to the door. No cinema or theatre. The politics is often reactionary so avoided.

How do you ‘know’ if a treechange is likely to be good?
You need a job (paid or unpaid) for each member of the couple if you go as a couple.

My wife Barbara has been busy here as a Health Service Manager of the local hospital, my practice manager and in local government, being the deputy Mayor for the past four years. This is essential.

You also need to be flexible and comfortable in any social situation, willing to accept a wide range of behaviour and beliefs without necessarily wanting to share a meal with them all.

What tips would you give to someone thinking about a ‘tree change’?
*Know how other members of your family unit will feel.
*If you have children under 12, l think they will love it but I can’t speak for adolescents within a high school environment that they are probably committed to. For some adolescents it would be a life changing positive.
*Know your partner’s feelings and know that there is a role for him/her in the town.
*At the beginning, be prepared to make an effort to be in places where there are lots of the community present. It is the only way that you will find others of similar interests that provide the connection that will allow you to want to stay.
*The city was a home, a family and a job that kept you there.
*The friends were important but were infrequent glimpses within a busy life.
*In a rural environment the community is continually around you and part of each day. You feel part of a unity that is unknown until you step into it.

To obtain a copy of Treechange – An Innocent’s Progress
Email: rickandbarb2@bigpond.com

Congratulations on your book Rick…..
and thank-you to Rick and Barbara for their continuing contribution to the rural community.