Skip to content
Uncategorised What To Do In Retirement

‘Retirement’ On The Ocean: The Enrichment Lecturer’s Tale 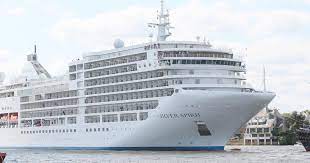 What do you do in ‘retirement’ when you’ve had a distinguished career in the military? For one enterprising ‘retiree’, you have a retirement on the ocean. It’s not a full time life on the ocean, but it’s one where you give enrichment lectures. The theatre on the ships he travels is usually at capacity, such is the high quality of his lectures.

Here he shares his recent story:

‘As a speaker on premium line cruise ships, my story for the year 2020 was of one cancellation after another.

A global emergency was declared on 31 January, so when I joined Silver Spirit on 1 February at Laem Chabang [for Bangkok] for a cruise to Hong Kong via Vietnam, the Philippines and Taiwan, I was not totally surprised to find in the suite a letter from the Master revising the itinerary. The revision, “in an excess of caution”, cancelled Hong Kong. How innocent we were as we expressed our disappointment and changed our return flights.

Little did we know how often that itinerary would be revised.

We made it to Ho Chi Minh City and then set out for the Philippines. Now port after port closed as we approached. For days the ship was in a holding pattern in the South China Sea. “Give more lectures” ordered the cruise director. It wasn’t clear that anywhere within range would take us.

Can cruise ships replenish at sea like warships? Guest morale was low. Then Silversea announced that Silver Spirit would return to Laem Chabang, disembark, and that guests would receive full refunds plus future cruise credits.

Morale rose, the bars were busy, and hey Saigon had been a great visit if the only one. What followed was the close down of the entire cruise industry. For me, places not visited included Amsterdam, Athens, Barcelona, Bergen…and a voyage up the Amazon.

12 months later the UK government announced that from May 2021 England-Only cruises could start for double jabbed guests and crew. Viking Ocean was quick off the mark, offering 8 day Portsmouth round trips called England’s Scenic Shores. The ship would be the brand new Viking Venus.

I was delighted to be asked to lecture on the first three cruises; not just that but the preceding 3 day inaugural naming cruise with godmother Anne Diamond. I would depart on 17 May – one of the very first return-to-service cruises.

This was still a time of very considerable concern about Covid and Viking made the inspired appointment of Dr Raquel Bono as Chief Health Officer.

The formidable Dr Bono was a retired Vice Admiral and her health and safety protocols were enthusiastically embraced and obeyed by guests and crew alike. As she toured the ship no one wanted to be caught transgressing!

The protocols included the start-of-day non-invasive saliva PCR test (a laboratory had been installed on every ship), the facial-recognition temperature check before breakfast, the daily tick-box health questionnaire on your device, and the test-and-trace dongle worn by every guest.

At night sanitisation robots went to work. Everyone was re-assured and relaxed.

The destination of the cruise was Liverpool, a great city, although my 3 visits in 3 weeks may be sufficient for a while. And we also visited Falmouth, Weymouth and the Scilly Isles and had a sea day cruising the waters around the Channel Islands.

With four of us giving talks, there was something for everyone every day. Dr Bono even permitted a show!’

So, what do you do in retirement? For one person it’s giving interesting and informative lectures on cruise ships. There is, of course, a lot of research involved, but the opportunity to travel, meet guests and enjoy cruise hospitality is definitely a good way of enjoying ‘retirement’.

Are you doing something interesting in retirement, your next career or encore career? Drop us an email.

Jill Weeks is the author of 21 Ways To Retire and co-author of Where To
Retire In Australia and Retire Bizzi. Information Provider For Great Retirement Lifestyles.
She is a regular contributor to radio.