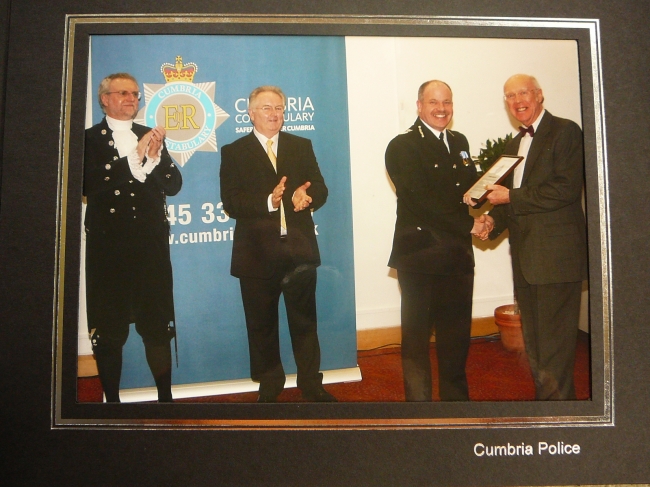 Alan is pictured receiving the “Safer Communities Award, from the High Sheriff, (the Queen’s representative for Cumbia), with the chairman of the County Police Committee, the Chief Constable looking on.

The Award, Alan says, ‘ was for a special project for the elderly. It is a training scheme to teach people how not to let strangers, bogus workmen, into their home.

Alan invented the aluminium beer car…..and received a ‘Key To The City Of London’ for his work.

However, Alan, very modestly, says, “I led a Research & Development Team designing both beer & soft drinks cans, also developed wine & spirits, with mixers added, in cans, eg. G & T. I am a Freeman of both the “City of London” & “The Worshipful Company of Marketors Livery Company”.

He is a member of: the Royal Society of Health, Institute of Food Science & Technology and also the Chartered Institute of Management. Alan is also the Founder of the Cumbria Neighbourhood Watch Trust, pioneered ‘Message in a Bottle’ and ‘Message in your Wallet’ with the High Sheriff.

In Memory of the late great Alan Smith

Mar 10, 2021 Traveller
Uncategorised Where To Retire In Australia

Is Tasmania The New Florida?