You Are Never Too Old To Dream Or Study In Retirement 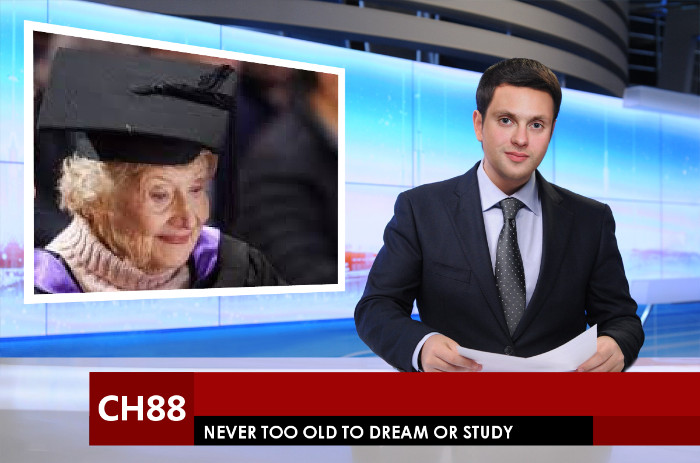 Showing that you are never too old to dream or study in retirement, is the inspiring Lorna Prendergast who graduated from  Melbourne University. She has a Master of Ageing – at age 90. Her studies centred around whether music was a ‘form of temporary relief for people affected by dementia’.

She was motivated to study for her Masters after seeing her late husband, who had Parkinson’s Disease, and others in a nursing home respond in a positive way to music.

The Master of Ageing is an online course.  Lorna ‘met’ her fellow students online.

‘Online study is a little different because there is a choice of subjects and most of us are doing different courses. However, there are lots of opportunity to join in webinars and discuss our opinions on the Discussion Board. We were also able to email other students and our tutors.

All events at the Uni were advertised, so we could attend if convenient. I did meet one student who had completed her online Master of Ageing at the same time as I did but we hadn’t always done the same subjects. Another graduate had taught in the Bairnsdale area.

I like to keep in touch with a lovely girl who lives in Australia half of the year and the other half in Ireland.

Online, I did learn a lot from our Asian students about their culture. The situation was probably different where there were a number of students living in the same area.

Personally, I was happy with the overall picture of being in touch with people all over the world. Possibly, for some of us we didn’t have the opportunity to network locally, but it was great to be able to get in touch with other researchers around the world’.

Studying – Why Not More?

Why is it some people return to study in retirement and others do not?  Is it the time involved?,  the cost?, not liking study?, not having access to different forms of study?

I asked Lorna what she thought could be some of the reasons: ‘I really don’t know why, I guess you would have to ask them. There could be a million reasons, everyone is different, and they may all have a different reason. Perhaps they didn’t enjoy studying when they were young. It is such a complex question that you may need to do a survey, it would be interesting.

I hated it when I started school, in Bubs, I used to refuse to go, so my Mum and Nan used to deposit me on Mr Leatham’s milk lorry and I would find myself going to school with a couple of dozen kids who also lived at the top of the town.

Grade 1 wasn’t much better as I used to wake up crying with “double earache as our teacher used to box us over the ears if we gave the wrong answer. By Grade 2 & 3 things improved.

Our teacher was a good hearted but sometimes crabby spinster whom I remember for two things.  When she got sick of us talking, she would scrawl ‘Shut up’ across her blackboard.

She also felt it absolutely necessary for us to learn about the succession of the British kings. So, she would make out a list of their names, then standing with ruler in hand, would have us recite them over and over again, I still can’t remember half of them.

Grade 4 & 5 was an absolute delight as we had Mr. George Robinson, he used to even give us a party when it was his birthday. By Grade 6 I really enjoyed learning as Mr Chadwick was a St John’s ambulance member, he taught us First Aid which has stuck with me all of my life. Fortunately, when I began school I never dreamt that I would still want to be studying when I was 90. Actually, when I went back to do the Master in Ageing, it hadn’t occurred to me that there are not a lot of older people formally studying. I know that there are many who love to learn new things in areas that interest them’.

What was the best part of the course for Lorna?
Each unit was excellent and very relevant. I liked the last unit “Shifting Paradigms” in particular. It really made us think how the world is changing and challenge ourselves about how we will cope.

For example, now that people are living longer, what do people want to do to fill in that extra time. What are the policy makers doing to ensure quality life for older people?

Did Lorna have any challenges with the course?
Lorna mentioned that doing online presentations was a little challenging, initially, but she soon got the hang of it. She also told me she comes from a ‘persistent family’- that never give up.  And. Lorna was full of praise for Melbourne University staff, including the i.t. staff who were ‘marvellous’.

What are families doing to help their older relatives get the best possible care?
It was encouraging to find that there are a lot of things being done to assist older people.

For instance, to assist older people cross at the traffic lights, a card has been invented which will slow down the lights changing.

In Japan, they have equipment when fitted to an older person which allows them to lift heavy objects as they would have done in their youth,

The Ford Motor Company and BMW, both were aware of shifting paradigms, when they sent researchers to the shop floor and asked their employees what they needed to do to retain them at retirement age. The small changes that the workers suggested cost the companies about $50,000 but increased their profits about 7% and the older workers were happy to stay and pass on the valuable information which they had acquired over a lifetime.

Manchester was the first city to join WHO and have made rapid strides in turning Manchester into an age friendly city. I am pleased to say that Bairnsdale is following suit.

Many of the units encourage retirees to take up volunteering, pointing out that they probably get as much out of it as the people they help.

You Are Never Too Old To Dream Or Study In Retirement