Humour And Biscuits…A Recipe For A Long Life 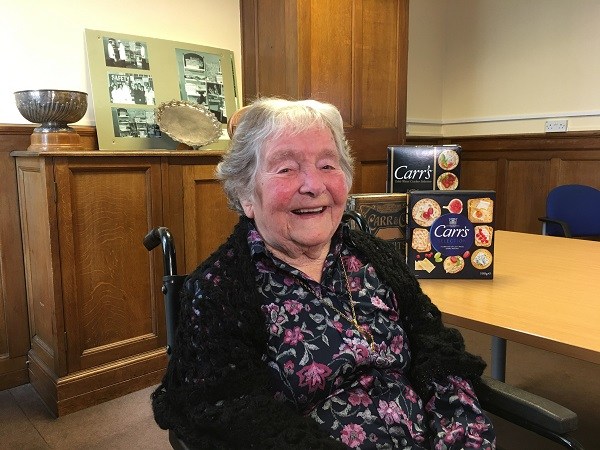 What do you do when you reach 100 years of age?   You celebrate by going for a helicopter ride.

Well, that’s what Margaret Carr did. The celebrations also included a tea party at a biscuit factory her great grandfather established. Most of us have eaten a Carr’s biscuit, particularly a Carr’s Table Water biscuit.  These days the  ‘bakery’ is now known as pladis biscuit factory.

Starting in the 1830’s in Carlisle, Jonathan Dodgson Carr, Margaret’s great grandfather, produced bakery and biscuit items.  It was a success.  Reports say that within 15 years it was the largest bakery business in Britain. It received a Royal Warrant, from Queen Victoria,  in 1841.

‘My first memory of the biscuit factory is my father taking me in as a young girl to show me off – I was too young and couldn’t stand the noise so I just bellowed!’,  Margaret told me.

During World War 2, Margaret worked at the factory, which did nothing to dampen her enthusiasm for the biscuits. ‘ I still love Carr’s biscuits and eat them whenever I can – I was given an enormous basket full of them for my 100th birthday – they are definitely my guilty pleasure!’ said Margaret.

A few years ago, I was fortunate to meet Margaret at her home. She was sitting by the window watching passersby in the village when a cousin of mine, who knew her, and I arrived. The cheerful Margaret was very welcoming and said she enjoyed living in her village, which was close to Carlisle. ‘Everything is here and I have many friends’.

Her grandfather died when her father was seven years old.  ‘My father was a big man with a big sense of humour. On his face he had a large scar from when he was bayoneted on the Somme, although he never spoke about the war’.

What did Margaret attribute her longevity to?   ‘Having a good sense of humour – it’s vital!!’