Skip to content
Travel Where To Retire In Australia Where2Now Passions

From The U.S. To Agnes Water…..Marci and Breck’s Story 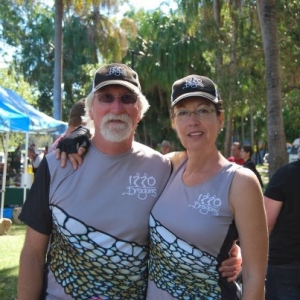 When people from overseas come to live in Australia, they often settle in cities (if they are working), and coastal areas if they are thinking of a seachange/retirement. However, it could be argued that there are not many people who would think of moving to a remote Queensland area, around 500 klms north of Brisbane…..unless you are adventurous and go-getters like Marci Russo and Breck Morrison. This is their story…..

Where did you used to live? What were your (work) backgrounds?
Both of us grew up and went to school in the east of the USA. We spent most of our life together in Boulder, CO, USA, where we met in the early 80s. Breck worked as a cabinetmaker and Marci as a freelance graphic designer. In the late 90s we decided to indulge our love of travel by selling (almost all of) our worldly possessions and taking off to travel the world. After wandering for a couple of years, and investigating desirable places to live in the US, we settled in Los Osos, CA, near San Luis Obispo. We lived there for a little over five years before getting the urge to wander again. Breck had been looking into real estate in other countries, and we were both interested in New Zealand and Australia. We owned a lot of Kauai and were planning to build a house on it.

Why did you move to Australia? Had you been to Australia before?
After Marci’s mother passed away, in 2002 we visited NZ and Oz, and after discussing the desirability of life on Kauai versus NZ or OZ, we quickly agreed on buying a house in New Zealand. Kauai is so small and the disparity between the “haves” and the “have nots” is painfully obvious. Life in New Zealand was much more egalitarian and inviting to us. As it would’ve been very difficult for us to immigrate there permanently, we decided to explore Australia with a pipedream of splitting our time between the two countries. We arrived in Sydney and drove north, eventually all the way to the Daintree Rainforest north of Cairns. Seeing the Great Barrier Reef was high on our list, so when we were in Noosa, we asked about a good place to visit to take a trip out to the reef.

Why choose Agnes Water?
The owner of the holiday house we were staying in suggested Agnes Water. We stayed in Agnes Water for a couple of days and fell in love with it. Everyone here seemed happy to live here and very friendly.

Agnes Water was experiencing a growth spurt when we moved here ten years ago. The only road into and out of town off the Bruce Hwy. had just been paved, the real estate was rising but still reasonable, and the weather was, as always, fantastic. As non-residents we were not allowed to buy a preexisting home, so we decided to buy a four acre block and build our own. It was then that we realized we could make our dream a reality by spending the summers in NZ and the rest of the year in Australia.

We did all the work ourselves apart from the installation of the steel piers, the gyp rock and the roof. This turned out to be a fun adventure as we built a shed first and lived in it, allowing us to build the house at a relaxed and pleasant pace. (Which we soon learned is a Queensland tradition!) The vendors we dealt with while building our house were great to work with, very honest and capable. As Breck had construction experience, Marci took the required Owner Builder Course and was our vendor liaison. She had no problems communicating and dealing with the tradies.

What were some of the Australian ‘pecularities’ that you encountered?
It took both of us awhile to understand the Aussie accent! In a group of people, we felt we missed a lot of what was being said, and didn‘t understand references, etc., at first. However, the fact that Australia is English and some of the traditions and customs are similar to the US made it easy to feel a part of the culture right away. It was only after a few years that differences became more apparent. We feel we’re always learning something new whether it’s a slang expression or a reference to an Aussie “icon” we’ve never heard of. But we find it interesting and enjoy being confused by new phrases like “spit the dummy”, “Chrissy Hols”, and being asked “Are ya winnin’?”.

How did locals react to the new residents from the U.S.?
We have not encountered much discrimination in terms of us being from the States, but we have heard a few disparaging remarks now and then. When you’re not from the country you’re living in, it seems that you automatically became the ambassador and representative of whatever country you were born in.

Was it difficult to find work?
Breck (gratefully!) retired from cabinetmaking as soon as we left the States. Marci continued to do graphic design work for some US clients. However, when we arrived in Agnes Water there were already a couple of designers in town, so Marci started volunteering at the primary school (the only school in town), something she’d done in the States as well. She was eventually hired as a casual relief Teacher Aide, and, just this year, hired on a permanent basis. Marci also tutors students after school, takes commissions for portrait drawings and sells art and a custom-designed line of souvenirs at the local Sunday markets.

What are some of the challenges and attractions of living in Agnes Water?
Living in such a small town (population of the town and surrounding area is somewhere around 2,000) has its advantages and drawbacks. We joke with friends and family back in the US that we have to drive 3 hours round trip to buy underwear. Our town has no fast food (a good thing), no movie theatre, no bookstore, no furniture shop, no dentist, no hospital, no shoe store, no airport, no train station, no gym or health club, no public pool and no high school. There is only one road into and out of town, and during periods of heavy rain, we get completely cut off — which happens every year, it seems.

We do have a golf course, bowls club, a few tennis courts and a Sport and Rec Centre with a lighted rugby field. We also have beautiful deserted beaches, surf waves, boats out to the Reef, great fishing, peace and quiet, an abundance of flora and fauna and a welcoming “we’re all in this together” attitude. Here, you’re welcome to start a club and make your own fun. Marci started a Book Club years ago and it’s still going strong.

We were both involved with getting a dragon boat team up and running, which now competes in regional regattas. Marci’s also involved in helping to organize and present the annual Art Show in town. Whatever your interest, there is probably a group in town either already engaged in it or willing to be. The major drawback with living here is it is very difficult to find work. And, if you have high school aged kids, they have to travel for hours and hours to get to a school or attend a boarding school out of town. (There are plans to build a high school but the local council is proving, once again, difficult in terms of requirements and fees, and everything is at a standstill at the present time.)

Do you have some tips for people thinking of moving to Australia
The immigration laws for U.S. citizens coming to Australia have changed over the years we’ve been living here. The visa that we were able to obtain is no longer available. What is available now it much more expensive to obtain, and may change at any time, it seems. We have to live with the fact that our visa status could be either taken away altogether or modified in some way in the future. Not everyone would find that acceptable, but we do. As it is now though, we can work full time on a 10-year renewable visa. We are required to have private health insurance, which of course we’d have anyway. It is much cheaper than insurance in the U.S. and we are very happy with it. To put it bluntly, if you have enough money you can buy your way into Australia — and indeed into most other countries in the world as a retiree.

It’s difficult to advise anyone as the laws keep changing. We suggest researching online and making several phone calls to immigration offices. When we need to clarify something or ask a question, it’s our policy to call the Australian Immigration Office, write the date, the response and the person who gave it, and then call back and ask the same question at least one more time.

We realize that we are not “the norm” when it comes to being willing to uproot yourself and live somewhere unfamiliar for an unknown length of time! But, we have loved every minute we‘ve spent in New Zealand and Australia and would enthusiastically recommend anyone who’s interested to look into it and ‘give it a go’!

Thanks for sharing your story Marci and Breck!