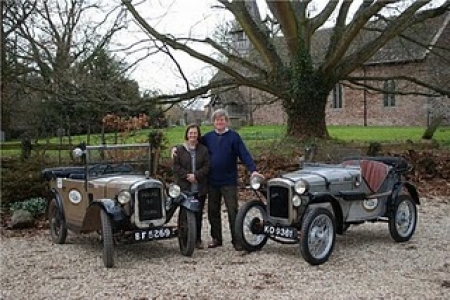 How did this all start? I have always had itchy feet, probably ‘cos Dad was in the Army and we moved around a lot, with me growing up (4 years anyway: age 4 till age 8) in Sierra Leone and absolutely loving it. The first “official” Peking to Paris run was to be in about 1982, and I had a 3 litre Lagonda of 1932 (still got it) ready for the trip, then the organiser went off with the money…luckily I had paid no deposit. Then work became too much of a burden to be away for too long, so I had to wait till I retired in 2001.

A proposal to drive a three wheeler put-put from Delhi to London fell apart because of border problems at the time, then I started thinking of doing Peking to Paris in 2007 following the 1907 race route. Then we thought we would do a sort of recce on scooters in 2005, then that became the Central Asia trip. In 2007 we did indeed follow the 1907 route, but that was an awful lot of birch forest in Siberia, and not too interesting.

However, Mongolia is great, so we thought we would rerun the trip with a car each, do far more of Mongolia, and take the opportunity to drive down to the Crimea and see the Crimean War Battlefields.

How many rallies have you participated in? Lots and lots. I bought my first old car when I was 21, and have had old cars ever since. We now have the two Austins, the 3 litre Lagonda, and a 1936 racing 1 ½ litre Riley. I have rallied and raced in England and France since 1979, and did the Mille Miglia in the Lagonda in 1997. Most of our rallies are just 4 day events with friends, so our 2005 and 2007 trips were a bit different to what we had previously been used to.

Does your wife Carmen drive? In thirty years she has driven the Lagonda a couple of hundred yards, and set the clutch on fire both times! The Riley she has driven on a few occasions, but never more than 100 miles. The Austin – well she has had a few short drives in that over the summer. If we succeed in this trip the main achiever is definitely going to be her. In 2007 she just drove on the two occasions we got stuck in sand, when I pushed and she steered, so she really is being very, very brave taking on this trip. I have told her just to concentrate (Watching for potholes mainly) and listen to the car……….and everything will be OK!

Do you need particular (driving) skills?
No. Just determination, good preparation, common sense, and a certain lack of imagination!

What were your careers?– I was a solicitor with my own firm till 2001, Carmen qualified as a photographer in Switzerland (she is Swiss- came over here 1968 as an au pair to learn English, and got distracted) but has never used her qualification. Spent early years of our marriage looking after the home and the kids, now stuck with just looking after me.

What are the challenges?– Roads-….Mongolia has little tarmac. It is a matter of following tracks, and choosing the one that seems to be the right one. We did about 400 miles of the Gobi last time, this time about 1400 miles. Russian roads can be absolutely awful, but at least you know where the road is (or supposed to be). Our route in Russia this time will avoid the worst area near Lake Baikal. In Russia you also have to look out for potholes and drivers on the wrong side of the road.

Tell us about the conditions along the way
Food.- neither of us is fussy and we eat anything.
Language problems– use the arms and talk loudly if nothing else works. We speak no Russian, Chinese or Mongolian, but it is amazing how one gets on! I think it 100% necessary always to be polite. The Austin type of car does make people want to “accept” you before you have even spoken a word though.
Toilets– I think someone said that if you were carrying a bar of gold and it slipped out of your pocket in the loo, you would not want to recover it. Best not to think about these “facilities” too much- just mind your feet, hold your breath, and get in and out asap.
Washing– although facilities are often very primitive, it is amazing how clean people seem to be, especially their clothes. Not much hot water in Mongolia, but you just put up with it.

Do you have a support crew?
No. I watch travel programmes such as Long Way Round with Ewan McGregor and it is a joke. He and his mate on two bikes had medical crew and I think two large 4×4’s. It simply is NOT an achievement to do something like that. Carmen and I are not mechanics, but I can just about keep a car going. We have to rely on good preparation, not thrashing the cars, and help from locals. Our little Austins really are very tough.

We had hoped to get another Austin crew/car along, with better mechanical knowledge, but no-one has turned up. There would be no point in having more than three/four cars as you then are far, far less likely to be invited to stay with locals, and indeed you become more “daunting” for the locals..so we never intended to be more than 4 cars with Carmen and I in two, and a max of 2 couples in the others. Now we will just be on our own, and if we get stuck in the middle of nowhere, we will hopefully have at least one other car that works.

What has been the most frightening thing you have had to face?
Most frightening?- the thing to try not to do is worry about what might happen. That way one would not even do the trip. In 2005 we were approaching the Kyrgistan/Uzbek border at 1 in the morning, in a thunderstorm, and Carmen drove into a manhole, flipped the bike and hurtled off her machine. Neither hurt.

In 2007, the Austin broke down, I was being towed by our guide in his van (in China you have to have a guide in his own vehicle) with Carmen in the back of the van, I had said do not exceed 35 mph as we had a very short tow rope, and wave your arms out of the window if you are going to stop or slow down – he had no brake lights. He hurtled along, braked hard, the tow rope wrapped round the front axle of the Austin, the car was thrown out sideways on two wheels and missed an oncoming lorry by millimetres.

What is the reaction of your friends?
They say that we’re mad. We get invited to lots of “last suppers”!

Are the bagpipes going on this trip? (and how did the bag pipe playing start on trips?)
No. I started taking them years ago and piped in Paris, Pagan Burma, Pushkar India (to a snake in a basket, who did indeed rear up), Peking, St Petersburg, Philae in Egypt, Petra in Jordan, Piper’s Bend in Zambia (a river bend given this name after my performance). We used to do trips at New Year, so having the pipes was good at New Year parties..then they just seemed to tag along. Won’t take them this time as they take up too much space.

Visit their website and think about donating to their important mission (£5,000 in 8,000 miles – to change the lives of children in developing countries).

**Kip says that the ‘donate’ link on their website can be used for “foreign” cash donations too..the donation is automatically changed to sterling.**