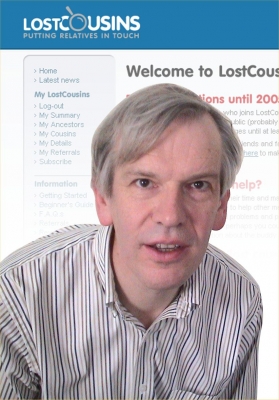 What was your previous occupation?
I used to run a computer games company, and although we produced a wide range of games, our speciality was sports simulations including cricket. Our cricket games were endorsed by famous players such as Shane Warne, Brian Lara, and Graham Gooch.

How long had you been in the occupation?
I was in software publishing for nearly 20 years – when I bought my first home computer there were just a few hundred in the UK, and probably no more than 20,000 in the entire world.

Why did you leave it?
As the games industry grew, with tens of millions of people owning computers and consoles, big media companies got involved and this made it incredibly expensive to both develop and publish games. Eventually it got to a point where I couldn’t afford to compete, so I sold up and did an MBA course while I was figuring out what I was going to do next.

Not long after afterwards I started researching my family tree, and when I realised how valuable it was to make contact with other researchers who shared my ancestors I decided that there ought to be easier and better ways of finding them. Eventually I figured out how it could be done, and started designing a website that would do it.

What is your occupation now?
I run the LostCousins.com family history website which I founded, and now has 83,000 members. I’ve put thousands of people in touch with living relatives they didn’t know about, and often the cousins live on opposite sides of the world.

In my spare time (when there is any) I come up with innovative ideas and try to find people or firms that can turn them into reality.

What have been the challenges?
When I founded LostCousins there were already 250,000 other genealogy sites out there, so it was a real challenge for a new site to get noticed. The day we launched there was a big family history show in London, and I spent the whole day handing out leaflets – but only 8 people signed up that first day, even though it was free!

And the good things?
Showing people better ways to research their family history – and linking up all those cousins.

The fact that Lost Cousins is entirely web-based is great, because it means that even though I have all those members, I can run the site single-handedly, and continue to do so even when I’m on holiday (which means I don’t have a big pile of emails waiting on my return). It also means that if we decide to retire abroad I can continue running LostCousins as long as my health allows.

How do you market yourself?
LostCousins has never advertised – because it was totally free at the beginning there was no income to pay for advertising, so I had to find creative ways of attracting new members. Because what LostCousins does is so different I was able to get a lot of press coverage, mainly in specialist magazines – and I also did a number of local radio interviews.

However most new members join because they’ve been told nice things about LostCousins by existing members – and in my opinion that’s exactly how it should be.

Do you have tips for people thinking about having a `second career´?
Choose something that you want to do, but not something that’s going to take over your life. And if you’re starting up a venture of your own for the first time, don’t under-estimate how difficult that is.