Where To Retire? Blackman’s Bay 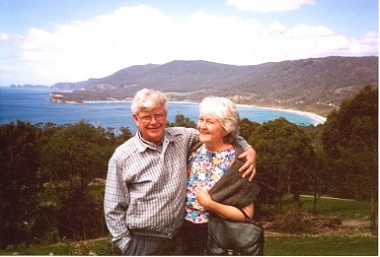 Name: Ian Mac
Age: Over 70
Current Occupation: Retired
Previous Occupation: I worked for 42 years with the Australian Defence establishment, firstly with the old Department of Air at Victoria Barracks, Melbourne and later with the Department of Defence at Russell Hill in Canberra.

Lived Previously: The little one-pub towns of Condah and Cavendish in the Western District of Victoria, then Melbourne, then Canberra.

Why did you move to Tasmania? We liked Canberra a lot but decided to move from there for family reasons. Nearly all our six children had flown the coop to work and wed in distant places, some overseas.

We thought it would be a grand idea to set up near one of them and spend the potential inheritances of the others by making long and frequent visits to them.

Our youngest child had found full-time work in Hobart and was enjoying life in Tassie. I’d spent time in all of the Australian States and had formed the impression that Tassie was the most scenic – and had the lowest housing costs. Also, and importantly, we had found on a previous visit that the life-style here was relaxed and people generally sociable. Shop assistants, for instance, gave genuinely friendly service, and neighbours were neighbourly. I likened the social ambience of Tassie to that found in mainland country areas about 50 years ago.

Why did you choose Blackman’s Bay?
When we first moved down here our son was living in Kingston, which borders Blackmans Bay. We were much taken with the general area south of Hobart and found suitable housing in Blackmans Bay.

What is the climate like?
Much better than we expected. The summers very rarely bring days of excessive heat anything like those experienced on the mainland; winter days can be a bit cold, but not as cold as Canberra (Blackmans Bay seldom gets a frost) or as miserable as Melbourne; autumns and springs are delightful. The countryside usually retains its varieties of greenness throughout the year.

What do you think are some of the attractions of the area?
There’s a nice, quiet beach. It’s only about two minutes by road from a sizeable business centre at Kingston and 10 – 15 minutes from the city amenities of Hobart. Scenic drives abound, because there aren’t any other kind in the whole of the State. Views are fabulous. Blackmans Bay has a good local shopping centre and nearby Kingston a much bigger one, which includes two large supermarkets and a recently opened Big W. The nearby Kingborough Sports Centre provides extensive facilities for in-door sports and an excellent health and fitness program for seniors called Ezy Beat.

Are there any ‘downsides’ to living in the area?
There are some. Because of its popularity, the area has had a large population increase in recent years and as a result road traffic is much denser than it was. Still, the rush “hour” doesn’t last that long. Public transport during the day is infrequent and practically non-existent at night. The intervention of Bass Strait makes it impossible to jump in the car at a moment’s notice and drive to visit family and friends on the mainland. And Blackmans Bay is a “dry area”. Though many times bigger than Condah and Cavendish put together, it has not even one pub. The local shopping centre includes a BYO Asian restaurant and a more upmarket fully licensed restaurant, thebeach, on Ocean Esplanade, but the nearest liquor outlet is down the road a little, at Kingston Beach.
PS
Ian (May 2007) says, Blackmans Bay is no longer a dry area. We now have a bottle shop in our local shopping centre. It’s called, appropriately, Cellarbrations

All this is, to most, only a slight inconvenience, easily
managed and to some others is no doubt considered a benefit.

Where is your favourite place for coffee?
“Litte Italy”, a quite small cafe in Collins Street, Hobart.

Where is a great place to eat?
Favourites of ours further afield are “The Red Velvet Lounge” at Cygnet and, a recent discovery, Cafe Kyari at Geeveston.

Where is a good place to stay in the area?
There’s a very good B & B called “Tranquilla” on The Esplanade, Kingston Beach.

Anything else you would like to mention?
Blackmans Bay, so close to Hobart, is by no means a cultural black hole. The Tamanian Symphony Orchestra, rightly known as “The Jewel in the State Crown”, gives excellent performances on a regular basis. The Theatre Royal, architecturally an historc gem, does likewise. Visiting shows, many by world class performers, can be seen at the Derwent Entertainment Centre.

Do you have a favourite spot to visit or live? Send us an email

One thought on “Where To Retire? Blackman’s Bay”