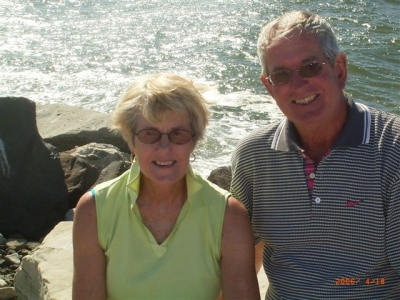 Helen and Bruce moved to Ballina, after living in in Sydney.

I retired from my job at the Australian Supermarket Institute (a lobby group for the grocery distribution industry). I consulted to the industry for about twelve months, but the golfing bug got the better of me and work just seemed to be too hard. But I came to the realization that you cannot play golf seven days a week, so took up an offer in 2002 to manage a couple of commercial businesses employing the clients of a Down’s Syndrome support organization.

Where have you lived before?
In all this time I came to believe that, although Sydney was a great place to work and raise a family, it was not the place to retire. So I commenced a ‘campaign’ to convince Helen that we should move from Sydney to ‘somewhere warmer and less hectic’.

Helen and I moved from the NSW country to Sydney to complete our tertiary studies.

Helen continued her career as a full-time school teacher until our son and daughter were born. She continued to work as a teacher on a casual basis since our daughter started school. I have worked for a number of large Australian and international companies as a human resources professional; and in 1994 commenced my ‘new’ career as a industry sector representative, initially in road transport and latterly in retail.

With the exception of an eighteen month period in Melbourne, we have lived all our married working lives in Sydney. But in that time we have lived in eight different homes.

Our son moved out of home in 2002; he now lives in country New South Wales and is a high school teacher. Our daughter lives with us, and moved with us to Ballina.

Why did you select Ballina?
Helen and I took a ‘holiday’ to Mermaid Beach on the Gold Coast. Helen had been suffering from chronic bronchial problems for some years, so a trip north at the end of Summer was ‘what the doctor ordered’. Several days of sun and surf, walking along sandy beaches and general relaxation brought her to the realisation that ‘I (she) could live up here!’ But where? Surely not the Gold Coast? But what about somewhere like Ballina?

We were both familiar with the Ballina district. Helen’s grandparents had lived for many years in Lennox Head (about ten kilometers north of Ballina), and had spent many happy school holidays with ‘Pop and Gran’. We also had very good friends living at Broadwater (twenty kilometers south of Ballina), who we met each year at our family beachhouses at Crescent Head and Bonny Hills (near Port Macquarie). So we packed up our Gold Coast holiday two days early and came down to Ballina to ’have a look around’. Having lived in eight homes, we felt that we knew what we wanted. We contacted several real estate agents, looked at about a dozen houses, and decided to buy (at auction) our current home.

What’s great about your location?
The more that we looked at Ballina, the more it became obvious that it was the place for us. Wonderful weather, no water shortages, at least five great ocean beaches, a first-class golf course, good local shopping, restaurants, movie and live theatres, all with ‘parking at the door’, medical and hospital facilities galore, the Pacific Highway running through the area and a jet airport only five minutes from our front door. Additionally, the bright lights of Lismore, the Gold Coast and Brisbane were only a short distance away. Ballina ticked all the ‘needs’ boxes!

Ballina had all the ‘pluses’ of living by the large country town by the sea without the ‘minuses’ of large city living (high rise, pollution, traffic, hassles).

We were very fortunate to have our good friends living in the area. Even before we moved into our home, we had been introduced into their social circle, which made it so much easier to feel ‘at home’. We have made a strong effort to extend that social circle through my involvement with golf and with Rotary International and Helen’s participation in the local Red Cross, View Club, Friends of the Library and the Community Art Gallery.

We both feel that Ballina had done so much to make us welcome that we should try to give something back to the town through voluntary community service. We have both greatly enjoyed doing so for the past four years.

Would you move back to your original location?
Each visit to Sydney merely confirms in our minds that we ‘did the right thing’ when we headed North. Apart from the fact that we miss our Sydney friends greatly, we can think of no other reason to contemplate a return to living in ‘the big smoke’. Ballina is truly ‘Paradise’.

One thought on “Where To Retire? Ballina, New South Wales”