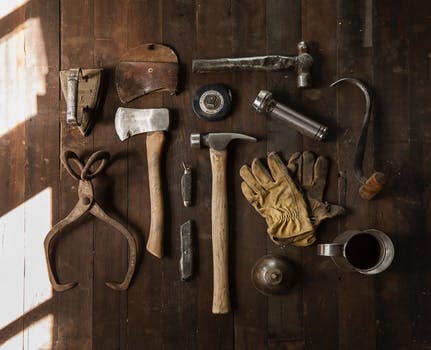 Carol writes….“Your comments about retirement inspired me to think about the subject”……Read on.

My father was forced to retire twice. In 1974, when he was 63, the company forcibly retired everyone over the age of 50. Including all their senior management. Thousands of years of experience was shoved out the door. Hard to believe, isn’t it?

By then, my father was living in a small town in Southern Virginia, transferred there many years earlier. He took the only job he could get. As a park ranger at the nearby national park. Which he loved because he was a restless soul and liked to be on his feet, constantly moving.

They forcibly retired him at 65.

Not to be deterred, he turned one of his many hobbies into a part time business. He made shadow boxes of miniature furniture. This hobby also involved my mother’s couture dressmaking skills as she made all the soft furnishings, in miniature, for his shadow boxes.

My mother died suddenly two years later. She and my father were inseparable. They fought like Tasmanian Devils, but had the strongest husband/wife bond I’ve ever seen.

Again, not to be deterred and to ward off loneliness, my father kept making his shadow boxes of miniature furniture and took them to craft shows, so he could meet people and focus on something other than his loneliness.

These craft shows led to lucrative projects from interior designers who asked my dad to make ‘models’ of rooms to show their interior design clients. My father not only made the miniature furniture, but also taught himself to sew so he could make the soft furnishings as well.

He did this until he was 80. A serious fall left him hospitalised until he died at 82.

While in his nursing home, to ward off boredom, he conducted miniature furniture making classes from his bed.They wheeled him down to the arts and crafts room, and he taught two days a week, mainly to people from the community. He had his own radio advertisement notifying the public of the days he was teaching.

His classes were free and the radio did his ads as community service announcements. The nursing home benefited not only from all the positive kudos, but from the offers from members of the community to do voluntary work at the home.

When he died in 1995, the population of the town was 2,500 people and almost 600 came to his funeral to farewell him. The large number of mourners knocked my sister off her feet.

When my father was active, he had a large garden. He and my mother loved growing daisies and every week they took bouquets of daisies to the local hospital, nursing home, wherever people would benefit from receiving a large bouquet of flowers. All free. My sister said many people at his funeral remembered receiving flowers from him.

So retirement is also working at something you enjoy.