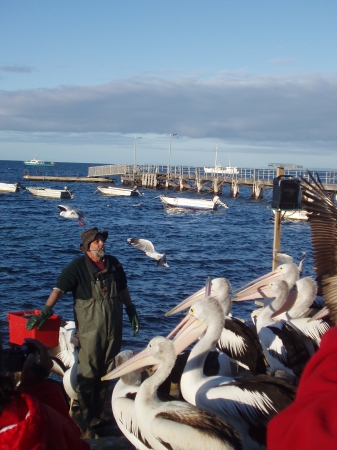 It is not often that you go to a performance and it is just so good, that you say ‘let’s go back to that again.…tomorrow’.
Well, that is exactly what happened when we attended a unique performance on South Australia’s Kangaroo Island.

Kangaroo Island (Australia’s third largest island) is an island where it is proudly proclaimed:
‘Think of an island seven times the size of Singapore. Think of native bushland, wildlife and pristine beaches. Think of adventure and days of exploring. Think of beach houses, local wines and sunsets. You’re thinking of Kangaroo Island, a brilliant blend’.
Read more here

We have to say that is a fair description of this jewel of South Australia!

Kangaroo Island is about 120 kilometres south-west of Adelaide. It is then a 45 minute (car) ferry trip from Cape Jervis, (tip of Fleurieu Peninsula) or a 30 minute flight from Adelaide. Kangaroo Island has a population of just over 4,000 people.

One of the ‘secrets’ of the island was its nightly performance by John Ayliffe. We’ve dubbed him the ‘Pelican Man’, but he is much more than that!

John’s dry wit and down to earth nature, made the ‘Pelican Feeding’ each day at 5pm a popular event, and one of Kangaroo Island’s star attractions. His Pelican co-stars were noisy and demanding and did not enjoy sharing the limelight with seagulls.

‘I was born at Kingscote. I cannot claim to have been born and bred here as breeding would suggest some planning and consideration, such as one might see in race horses.

Previously I was a farmer and went broke in the early ’90’s along with a lot of other farmers.

I went farming because the only thing I passed at school was the gate on the way out and it was not until I was 50 that I discovered I was dyslexic. I would have liked to do law but in those days one had to be able to spell to get to uni.

In the old English language work and play meant the same thing and I have been lucky to have a job that is more like a very serious game than work.

Sure I have to make money but I am driven to leave a legacy to the community and the State of a viable penguin colony and the pelican feeding in a wonderful garden in Kingscote. One garden area is to the north of the Kingscote wharf and the other is about to be stated early next year along the wharf’s southern border. This dream could not become a reality without our great staff, community supporters and my life partner, artist Jenny Clapson.

The pelican feeding was at 5pm each day on the Northern side of the wharf and the penguin tours each evening at the wharf.

I am also lucky in that I have a business that I have been able to do for a number of years.

Because we employed young people this enabled me to stay in touch with the younger generation and perhaps one of the great things about the business is that we have been able to get some lost kids back on track.

It is kind of nice to hear a kid yell out, ‘ Hi John!’, as one drives down the street’