Skip to content
Ask An Expert Older and Retirement Thoughts 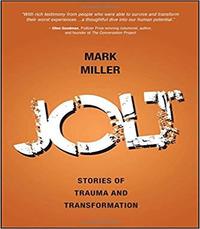 Mark Miller is a journalist and author.  He’s also editor and publisher of RetirementRevised.com  And….he’s also a nationally-recognised expert on trends in retirement and ageing.

Mark has written a book called: Jolt: Stories of Trauma and Transformation.
Reviewers of this important book have said it:
*is a ‘powerful read’,
*has ‘remarkable research’,  ‘compassionate, clear narratives’  and ‘inspiring stories’

Mark says the stories in Jolt are about ‘people who have taken sharp turns later in life to new careers, often driven by a desire to find greater purpose and meaning in their work and in their lives’.

We chatted with Mark about Jolt.

Does age have an impact on how people recover from a life crisis?
It’s a phenomenon that can occur at any age. But some experts think it is more likely to occur at midlife and beyond, partly because we are more likely to have some sense of perspective that guides us toward growth.

Why did you want to write Jolt?
The book is an outgrowth of writing I’ve done over the years about people who have done mid-life career reinventions with an idea of a new career with purpose. I have interviewed dozens of people over the years who have made amazing midlife career transitions to new careers with social purpose. Over the years, I noticed that many were motivated to change their careers following a very traumatic life event. I became very interested in that aspect of the story. So, as a journalist, what do you do? You decide to write about it. It was then that I learned there is a large body of clinical psychological research on this topic, and that the researchers had given it a name – “post-traumatic growth.”

What were some of the traumatic life events of people you came across?
Some are very dramatic – survivors of terror attacks, plane crashes, or people who lost loved ones through gun violence or other acts of violence. Workplace accidents, life-threatening illnesses. And some were more subtle, emotional traumas.

Did everyone that you interviewed, who experienced a traumatic life event, change their life in a positive way?
No. In fact, I include a chapter about people who have not gone through these positive transformations. I wanted to make clear that this is not something that happens to everyone, and that no one should necessarily expect that of themselves. But it does happen.

Does age have an impact on how people recover from a life crisis?
It’s a phenomenon that can occur at any age. But some experts think it is more more likely to occur at midlife and beyond, partly because we are more likely to have some sense of perspective that guides us toward growth.

What are some examples of the people changing their lives after a traumatic event?
One story I think is worth telling in this moment, in particular, is that of Lucy Macbath who was a flight attendant for Delta Airlines living in Georgia. And in 2013, her teenage son, Jordan David, was murdered in what was to become one of the better known as Stand Your Ground cases in Florida. He was out riding with some of his buddies, they pulled into a 7-11 parking lot to go in and get drinks, snacks. They were playing loud rap music in their car and a man pulled in next them and a fight ensues over the music. This guy is yelling at them to turn the music down. One thing leads to another, they were arguing. And this man pulls a gun out of his glove compartment and starts firing into the SUV, and 17-year-old Jordan Davis loses his life.

Lucy, who has never been a particularly political person, went  through a remarkable transformation where she felt compelled to get involved in the fight to curb gun violence. And she gave up her career and wound up becoming a national spokesperson for communities of faith and for the, you know, African-American community, she’s African-American, for Everytown for Gun Safety, an advocacy group fighting for gun control. She did that for a number of years. And now she’s a candidate for Congress.

Has writing Jolt changed your view of the world? If so, in what way/s?
Well, the stories in the book reinforce some things that have been important for me, I’d say, over the last decade or so. I’ve been very fortunate in life not to have experienced, any of the awful traumas of the type that I describe in the book. But the stories in Jolt reinforce for me that we don’t have forever, and that if there are changes we want to make in our lives we should get on with it. One of my takeaways is just a confirmation to me of the urgency of now

Thanks Mark for your work.

Grab a copy of Jolt here