The Inventor Who Keeps Inventing! 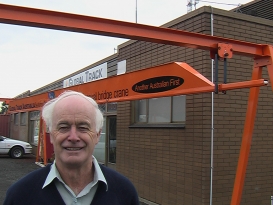 Describe Your Business / Invention
The invention is a manual crane bridge that can rotate, oscillate and articulate. Due to the design we have the ability to build the longest functional manual crane bridge in the world. The longest our opposition can build is about 10 metres. I wanted to build a 12 metre crane and use an American track. When I asked America for their track specification, I was told the longest I could go was 9.8 metres. I obtained track from another source and built a 12 metre crane bridge. We now build a functional 15 metre crane bridge. A one tonne 12 metre bridge with one tonne at the outer end takes about 6 to 8 kilo effort to start it moving and about a 10 to 11 kilo effort to keep it moving.

Why Did You Establish Your Business?
The business of Global Track was established to operate the manufacture and sales of pivotal manual crane bridges and develop other products.

Tell Us About Your Career:
My first attempt at inventing was when I was 8 years old. I mounted a number 8 wire crank between two wooden posts and placed rubber bands pulling in all directions so as to make the crank rotate. My perpetual motion machine didn’t work, my first failure.

When still at high school I used to fix the farm machinery, for example, the Dodge farm truck snapped the timing chain, broke the block, came out the side of the motor and landed on top of the cylinder head. Ater pulling the motor to bits and pulling another old Dodge to bits to get the parts I rang the local Ford dealer who told me how to time the motor, put it together and away it went again.

I served my apprenticeship as a diesel mechanic in New Zealand. I sat my exams with my instructors, as these were the first diesel exams held in New Zealand. One part of the exam was to make a copper cube and weld it up. We were given a measured amount of silver solder that we could use, if you used too much you failed.

After the cube was welded up it was crushed in a vyce and was not allowed to split at the welds. My instructor failed the test and I passed.

I left New Zealand at age 25. On arrival in Australia I applied for a job in the test section of the product engineering centre with the International Harvester farm machinery company. I was rejected and was told were no jobs available, after a couple of weeks the phone went at Alcoa where I was working as a fitter. It was International and the guy said, ‘You applied for a job here. We have a position available’. I thought it was strange for a job to suddenly come up in the test division when I had been told by the first person I spoke to that jobs rarely ever came up in the test section. I went for the interview and was told straight away that I had the job.

A while later I found out that the manager of engineering knew my old boss in New Zealand and had heard I was looking for a job. He told the boss of the field test group, ‘Find that guy and hire him!’. What a stroke of luck!.

I was there for 10 years and then bought my own International harvester dealership in Finley in NSW (‘McKay Inter Sales’). While I had the dealership I used to design, manufacture and market some of my own farm machinery. We built one machine with an innovative farmer (Mike Hosie) . It was a ‘bed shaper’. A farmer used to take five passes to pull up a 1.5 metre tomato bed. Mike built a machine that pulled up 3 x 1.5 metre beds in one pass. I used to travel to all the farm machinery field days flogging our products.

When International went broke, times were very tough, with a drought and a lot of other factors against a machinery dealer so we decided to shift back to Geelong to put the three children in Geelong Grammar. Two of my six cranes (from Finley) didn’t sell at the clearing sale so I took them to Geelong and set up a crane business, by my wife and I working many, many hours. We managed to pay the school fees and educate the children.

I set up ‘Bay Lifting’ selling lifting gear and after about six months sold the crane business and concentrated on the lifting gear sales. I also set up Bay Testing, which tested lifting gear. I also designed and manufactured special lifting appliances for customers’ special needs. I saw an opportunity for a mobile testing facility, so designed and built a 12.5 metre semi trailer into a mobile 115 tonne testing facility. People would ask what I was doing, but they could not grasp the concept. It took two years to build, in my son, Bruce’s, and my time. The rig had its own office, cooking facility, workshop with all the stock necessary for all repairs to lifting equipment. My daughter, Andrea,obtained her semi-licence and drove the rig for me….but that’s another story.

We obtained some very lucrative contracts with council, power suppliers, smelters and others. I sold that business and the test rig is still working today. Others have tried to copy the concept but I am of the opinion that they have built their rigs too small and are not covered.

While still in Bay Lifting and Testing, I tried to develop a better overhead bridge crane system, because some cranes would jam when we were testing them, and they were hard to move. It was hard deciding whether to pass them and issue a test certificate. I decided there had to be a better way. The first system I came up with was a complete failure. I couldn’t buy a particular bearing I needed so I started making the bearing, but that was too costly, and was scrapped. The current system invented and this was done at a time when most inventions are created…. at about 2am.

With seven years of development we are finally heading to market My son, Bruce, has joined me and we have some excellent reports back from customers. Some customers have already purchased their second Global Track pivotal crane systems and one customer has eight.

Do Inventors Ever Retire?
I believe a true inventor is one who will always be looking laterally One who has the knack of seeing and achieving an easier way to do the job. No, inventors do not retire.
In words I once read….
A description of an inventor could be:
They will not follow where the path may lead.
They will not go instead where there is no path and leave a trail.
They won’t be afraid to take the big step.
Remember you can’t cross a chasm in two steps.
Source: unknown

What Is Your Concept Of Retirement?
When I make it I will retire and work about 1 to 3 days a week. I will travel and see a lot of the world that I would not have been able to see, as you can’t invent, develop a product and travel on an inventor’s income.

Have You Invented Other Things?
When I had the business at Bay Testing I invented a lot of small items for one-off jobs. One job I was given at Fords was to build a machine that could pick up air conditioners and A/C motors of various sizes from the top some from the bottom some with 100mm clearance to the life point, travel through a 600mm passage work on a floor grating six metre sup and be able to be lowered to floor level. I designed and built the unit and it is still working today. I also designed another attachment so the machine could do other jobs.

What’s The Best Part About Your Business?
The design and development of product. One task I have at the moment is to design a lifter to pick up various sizes of car tow bars, turn them 90 degrees and put them on a 35 degree angle to hook onto a production line. The company I am working for has spent a lot of money looking at ways to do this job, with the help of the new earth magnet to pick the product up. The best part will be when I get it working, the company will buy six cranes, plus there are three more factories to fit out.

What Are The Challenges Of Your Business?
The biggest challenge in the business is financing the project. There is a lot of money out there if you have a good idea and if you are willing to give your company up and hope you get something out of it in the end. I have been very fortunate that I have not had to borrow money and have had the finance for the job as I have gone along. A person with an idea and no knowledge of design, drafting, development, production techniques and many other pitfalls has a very difficult task. Other challenges are trying to get the product to the overseas market. Although there are quite a few government incentives and assistance in the market place they are sometimes quite hard to get. I applied for a comet grant four years ago and was told I was ready for market, so no grant. Four years later I am just getting to market. A grant would have helped me to market years earlier and given the government taxes a lot quicker.

We hear that you have won several Awards?
I have been very fortunate and won six awards / prizes:

Advice For People Who Would Like To Pursue A Second Career (Or Want To Invent) After Age 50?
Always:

At the beginning I was told 10 years before I get a return. I did not believe it, but I do now. I am one of the lucky ones with prior knowledge of development cost and methods having developed and built farm machinery and other items. A person who I have just started helping, obtained his patent in 1991, and is just past the prototype stage. It can take a long time.

Follow your dream, but don’t follow that dream to the extent that you lose a wife along the way.

I had a secretary that started a scrap book for me. The first entry is 1/9/1978. I have kept it up ever since. It will be good for the grandkids. I just opened it to get the date of the first entry and saw the article, ‘Finley to Darwin’. It was about a machine I designed and built to sow rice, urea and super at the same time.

I shipped it up to Darwin and went up and assembled it. My mate and I were putting it together and we thought the two people working with us were lazy buggers, as they wouldn’t have a go. By midday we were buggered with the heat, but the locals were still going! It was a bit like inventing: be sure you know what you are capable of!